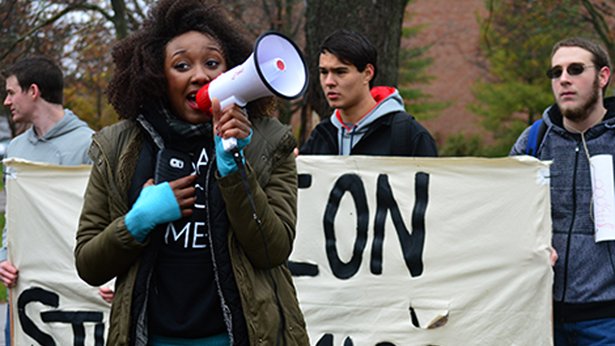 CMU senior Portia Brown says she tried to work her way through college, but couldn't, and now finds herself buried in debt.Photo: Mark Ranzenberger

Students from across the United States – including at Central Michigan University – marched on Thursday in what organizers described hopefully as the “Million Student March.”

About 100 CMU students and their sympathizers showed up in 40-degree weather in the midst of high winds and sideways rain. The students across the country were demanding free university tuition, forgiveness of student loan debt, and a $15 minimum wage.

Skeptics immediately derided the students as entitled little brats. Some members of the baby boom generation demanded to know why today’s students didn’t just work their way through school like their parents and grandparents did.

Here’s what today’s students are up against: The annual cost of attending CMU is listed at $22,922 by the authoritative CollegeData.com website.

That’s for one year. A typical student finishes in five years: five times $22,922 equals $114,610 for a degree from a Midwestern university.

What would it take to earn enough to work one’s way through college? Let’s do the math.

Assume that during the 13 weeks of the summer season, mid-May to mid-August, the student works 40 hours a week. That’s 520 hours.

Ask yourself: Are there many part-time jobs that pay $22.60 per hour?

The cost of attending a university have skyrocketed, and it’s very hard to pin down a single reason. Health care costs are a big factor. So is the cost of building and maintaining the infrastructure of a major university. State subsidies haven’t kept up, with the taxpayers’ share of the cost of educating young people dwindling from more than half 40 years ago to less than a fifth today.

Certainly, full professors are paid pretty well, but at school after school, tenured faculty members are being replaced by lower-paid, often part-time adjunct faculty members. Many instructors work for two or three different schools at once, commuting from campus to campus to knit together a full-time job.

Classes are moving online, which saves the university the cost of a classroom. Often, they’re taught by free-lance faculty members who don’t get benefits.

Meanwhile, as blue-collar jobs migrate to lower-paid parts of the world, ambitious students rightly see bachelor’s degrees as entry-level credentials into the 21st-century workforce. Families sacrifice. Financial aid and, yes, part-time work and summer jobs pick up a lot of the cost, but the average debt load of a 2014 CMU graduate still was $33,545.

The impact of that debt load goes far beyond the individual. If two graduates marry, their family begins $67,000 in debt. That forces delays in qualifying for a mortgage, or even buying a new car.  The ripple effects spread.

Student loan debt now totals $1.6 trillion. That’s with a “t.” At 8 percent interest, typical for student loans, that would generate somewhere around $128 billion a year in interest income. The lenders won’t let go of that income quietly or easily.

An educated population is a benefit to the country. Incomes and living standards are much higher where a larger percentage of people have degrees. But talented, intelligent young people, like the students who marched, say they feel as if they’re forced to play a game that’s rigged against them.

Is free tuition and loan forgiveness the answer? Someone would have to pay, and no one’s standing up and volunteering. But the current system is untenable, and ultimately will hold back the entire country, not just the people who earn degrees.