Last Updated by Denyse Shannon on 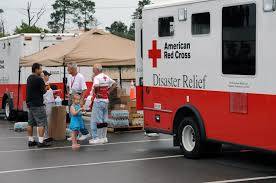 Four local Red Cross volunteers were deployed over the weekend to help flooding victims in Houston, Texas. Tony Lasher spokesman for the central bay chapter of the American Red Cross says the effects of hurricane Harvey are continuing this week, so volunteers are helping with getting people into shelters and make sure they have necessities to start with. He says while they are there, workers will be helping people connect with what they need.

“They’ll be involved in door to door meal distributions, and mass mobile feeding; engaging with people and they’re going to get them the resources they need to start working with the Red Cross, FEMA, and all of the other agencies to start getting them the systems and getting recovery resources.”

Lasher says volunteers will spend up to three weeks on deployment, and then others will follow. He says the short stints help prevent fatigue. He says anyone who thinks they’d like to go help should contact the Red Cross for training first. He says because of the ongoing crisis it would not be a good time to self-deploy without some kind of training and resources. Lasher says expedited training is available to deploy within the next few months for anyone wishing to assist in that way. He says smaller flood events, like the June incident in the Great Lakes Bay Region may take up to a year to recover from, but the Texas flooding could be decades in cleanup, so resources will be needed for years to come. Lasher says though there are a number of different relief agencies involved, their greatest need is financial. The Red Cross estimates an excess of $50 million in needed resources. He says clicking on the donate link for hurricane Harvey at redcross.org or calling 800-RED-CROSS is the best way to contribute. Texting the word Harvey to 90-999 will also send a $10 donation.