Q-90.1 FM celebrates the British Invasion with an afternoon of British rock February 14. 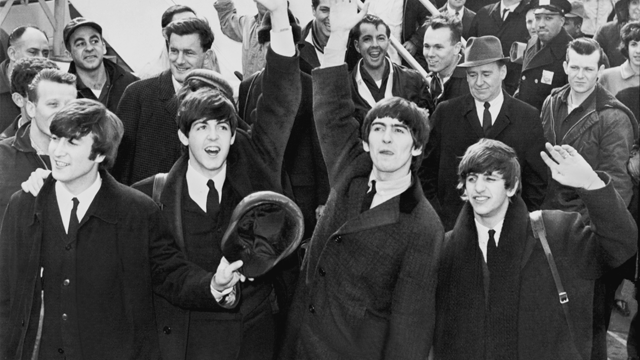 The Beatles arrive at JFK Airport February 7, 1964. Photo courtesy of The Library of Congress.

It was fifty years ago this month when The Beatles landed in America and the British Invasion was underway. Tune in to Q-90.1 FM Friday, February 14 as we celebrate the occasion with an afternoon of British music that has woven its way into the fabric of American culture.

Beginning at noon, join Lee Monday and Scott Seeburger as they return to the airwaves with a one-hour special, The British Music Invasion: 1964. This is when it all started. Hear classics from The Beatles, The Rolling Stones, Herman's Hermits, The Animals, The Dave Clark Five, a few surprises, and much more.

The British Invasion paved the way for many English acts to find success in the United States for years to come. This trend has continued even though musical styles have evolved over time.

At 1 pm, The Friday Jam with Jeff Scott explores the British bands that came a few years later and found success in America. The show will feature acts like Pink Floyd; King Crimson; Status Quo; Fleetwood Mac; Emerson, Lake and Palmer, and more.

At 2 pm, Radio Wasteland with Nick Danger will take on '80s and '90s British fare with the likes of The Sex Pistols, The Clash, The Cure, English Beat, and more.

The Friday Jam with Jeff Scott airs every Friday on Q-90.1 FM from 1-2 pm. The program explores six decades of rock and roll and features deep album cuts, live cuts, and music from local artists.

Radio Wasteland with Nick Danger airs every Friday on Q-90.1 FM from 2-3 pm. The program format is alternative rock from the '80s and '90s and also features music from local artists.