After 17 1/2 years on the air, Q-TV's weekly call-in show will come to an end with the host's retirement in December. 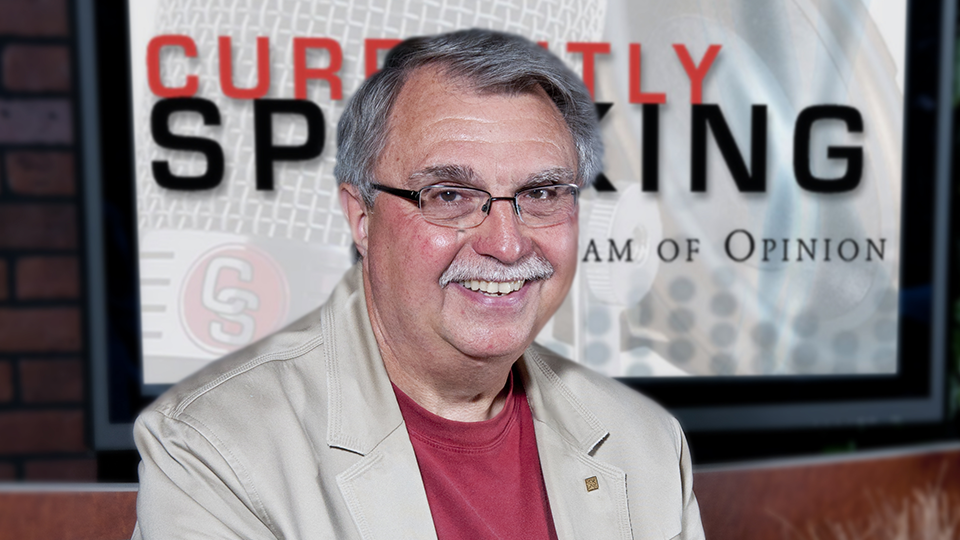 Andy Rapp on the set of Currently Speaking.

Launched in 1999, Currently Speaking – which airs weekly on Tuesdays at 8 pm and is repeated Sundays at 2 pm - is in its 18th season on the air. The program is a live current events discussion program.

Rapp is joined in the studio by journalists, academics, and experts. Appearing with him is a rotating roster of college professors and newspaper writers who are well versed in a variety of local, national and global issues. The team discusses three or four topics on air, taking viewer phone calls to further expand on those issues.

Rapp worked full-time at Delta College for 18 years in the 1970s and 1980s, where he taught broadcasting history and law classes. He also taught speech and coached the forensic team at Northwood University for a number of years before retiring in 2015.

"I’ve had a great run with Currently Speaking and feel it’s been well-received,” said Rapp. “For seventeen and a half years, we’ve presented a unique local program that featured important and interesting guests. And, I’ve really enjoyed interacting with people who call to participate in the show."

"I was a student of Andy Rapp’s at Delta College, where I pursued a broadcasting degree,” said Pam Clark, Executive Director of Institutional Advancement at Delta College. Clark also leads Delta College’s public broadcasting stations. "In the 1990s, our former program manager and I were responsible for bringing Andy back on the air at WDCQ-TV. We wanted to have a local program presence and Andy was at the top of our list, since we knew of his great abilities."

Rapp had been a personality at the station since the early 1970s, when he hosted a daily discussion program. Day By Day, which ran on the old WUCM, Channel 19 – now WDCQ-TV – was a daily half-hour variety show that aired for 13 years, offering 3,400 episodes in total.

Currently Speaking will not continue into the new year, as the station assesses what direction to pursue next. "Live local television is a challenge, but it differentiates us from other options on TV today," said Q-TV General Manager Tom Bennett. "We weren’t quite prepared for Andy’s departure, so we’ll need a little time to determine what the program time slot will become," he added. "We have a focus on local documentaries, too, due to our audience demand. It shows that localism is of value in the Great Lakes Bay Region."

Q-TV has received more than 40 state and national awards for broadcasting excellence, many for the production of local documentaries. Any options will be put into place in the fall 2017 season.

It’s been a busy year for Q-TV. Along with Rapp’s departure, the station also faced the possibility of going off the air. Early in 2016, Delta College’s Board of Trustees made the decision that Q-TV would not participate in the Federal Communication Commission's spectrum auction. The unprecedented auction – which is still incomplete at this time – was launched to buy up television spectrum from public and commercial broadcasters across the country to resell to wireless and cellular phone providers.

At the time, Delta College President Jean Goodnow said, "There is tremendous support for the station within the Board, the College and in the community. Public opinion to stay on the air has been overwhelming."

Andy Rapp lives in Midland with his wife, Donna. They are parents of daughter Meghan, who now resides in Wisconsin.

Plans are currently underway for honoring Rapp early in 2017. Those interested in learning more may contact Pam Clark at 989-686-9225 or pamelaclark@delta.edu.