Bob Przybylski To Discuss 'Settling In' At Castle Museum 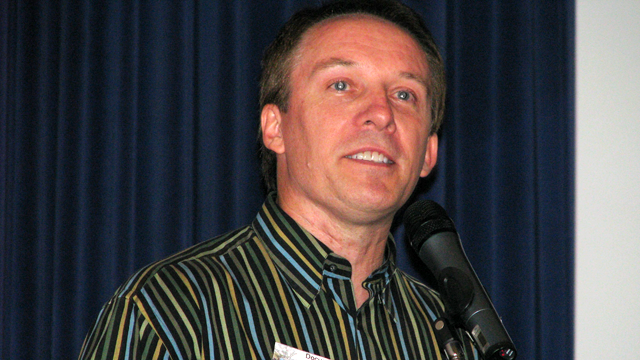 Delta College’s Q-TV producer and director Robert Przybylski will be at the Castle Museum of Saginaw County History to share excerpts from Q-TV's history documentary, Settling In: Immigrants & Cultures That Built Mid-Michigan, Tuesday, April 26 at noon.

We're very proud to have Amy French, Ph.D., assistant professor of history at Delta College participate in Settling In.

Hazardous labor conditions were common in most industries during the late 19th and early 20th centuries. Workers were treated as cogs in the vast production machine, and little was done to ensure safe working environments for those toiled long hours often for little pay.

Dr. French, an expert in labor history and consultant on the project, spoke about the poor labor conditions during this time in Mid-Michigan and what impact these had on those trying to "settle in" to our area.

She also discussed the "Ten Hours or No Sawdust" lumber strike in Bay City and Saginaw, which shut down all the lumber mills along the Saginaw River as workers fought for better working conditions and shorter hours in the saw mills.

We are happy to announce the first airdates for Settling In. The documentary will premiere Saturday, February 28 at 7 pm on Q-TV. We will also have a repeat showing on Thursday, March 5 at 8 pm.

We interviewed Valerino Rodarte, who told his family’s story of migrating from Texas to Michigan as a nine year old to work in the sugar beet fields.

Through hard work and sheer determination, he and his brother, Manuel, went on to found Rodarte Builders, a successful construction company that has built over 2000 houses across mid-Michigan.

We also spoke to Valerino’s son, Larry, who is the publisher and editor of Mi Gente magazine, a cultural and lifestyle magazine serving the Latino/Hispanic community of Michigan.

Larry also spoke about the Bracero Program, a series of bi-lateral agreements between Mexico and the United States that allowed millions of Mexican men to come to the United States to work on, short-term, primarily agricultural labor contracts.

From 1942 to 1964, 4.6 million contracts were signed, with many individuals returning several times on different contracts, making it the largest U.S. contract labor program.

The Great Migration, or the relocation of more than 6 million African Americans from the rural South to the cities of the North, Midwest and West from 1916 to 1970, had a huge impact on urban life in the United States.

Driven from their homes by unsatisfactory economic opportunities and harsh segregationist laws, many blacks headed north, where they took advantage of the need for industrial workers that first arose during the First World War.

During the Great Migration, African Americans began to build a new place for themselves in public life, actively confronting economic, political and social challenges and creating a new black urban culture that would exert enormous influence in the decades to come.

Dr. Nash’s ancestors were house service staff to Saginaw lumber baron Clark Ring and became like family to him. They resided in the Ring mansion, which today houses the Saginaw Museum of Art.

Dr. Nash also spoke to us about his great-grandfather and grandfather’s connection to the coal mining industry in Chesaning.

Alfredo Santos Speaks with Us

Alfredo Santos, of Elkton, Michigan, spoke to us about his journey to Michigan.  The son of an American mother and a Mexican father, Alfredo’s family faced 6 years of struggles to get their legal immigration papers.

He was 12 years old when he finally arrived in the United States.  While in Texas, his family was recruited by the Michigan Sugar Company to come to Sebewaing and then Elkton and work in the sugar beet fields.

He shares his story of life as a migrant worker and his pride in being an American.

Dr. Louis Byrne recently came to the Q-TV studio to tell his story.

Dr. Byrne is a first generation Irish immigrant from Dublin, Ireland who came to the United States in 1970 after being recruited by another Irish doctor, Dr Hoban, who worked for the Saginaw Cooperative Hospitals and who recruited 70 Irish physicians to the Saginaw area.

Dr. Byrne has been here ever since.

The Q-TV cameras visited the Stein Haus in Bay City to enjoy the Celtic Jam with Hoolie & Friends. Every Tuesday night at 7 pm, local musicians get together and perform Irish music in a relaxed, casual and Irish pub-like roundtable jam session using traditional Celtic instruments. The musicians' goal is to keep the Celtic music traditions alive and connect with Irish culture. Enjoy the song "Rough Atlantic Sea."

We interviewed Robert Cederberg as he told the story of his Swedish grandfather Alvin Cederberg, and the founding of the Cederberg Brothers Dairy, which operated for four decades in Bay City.

He also spoke of his other grandfather, John Constantine, who alone at the age of 14 and not speaking a word of English, immigrated to “Greektown” in Detroit, and eventually opened the well-known Pullman Diner in Bay City.

His family history embodies the entrepreneurial spirit of the early immigrants.

Khayam & Maya with Their Family

Producers Bob Przybylski and Christine Santiago Drake spend the afternoon with Khayam Hussein and Maya Soden and their children, Fatima and Moses as they explore some of Bay City’s fun and interesting places.

In our studio last week we met Maya Soden, an American woman who converted to Islam, and Khayam Hussein, her Kurdish Syrian husband who is now a new American citizen. They told us their story of living in Syria and the sacrifices they made to relocate their family to the United States.

Bay City's Craig Windt talks about why it's important to know where our ancestors came from.

Here is the first footage released from 'Settling In.' In this clip, people clean up the historic grave sites at St. Paul's Cemetery in Frankenlust.

We shot our first interviews in the studio today with Craig Windt and Dorothy "Dutch" Heme, both of Bay City.

Shooting Starts for Settling In

We shot the first footage for Settling In over the weekend at Saginaw's Greek Festival. We will be starting to shoot interviews shortly, but are still interested to hear from anyone with an interesting family history or personal immigration story.

A New Documentary from Q-TV

Q-TV is proud to announce our latest local documentary, Settling In: Immigrants & Cultures That Built Mid-Michigan.

Settling In will tell the struggles and successes of the cultures and immigrants that came here and built the Great Lakes Bay Region and Michigan.

As we have done with previous documentaries, we will be asking the public to submit stories, photos, and other documents that we can use in the documentary. More information will be available soon on how you can participate in this project.

Many diverse ethnic groups were drawn to the Great Lakes Bay Region as developing frontiers in Michigan paved the way for agricultural and industrial growth. And their populations increased as they settled into the Mid-Michigan area.

As each wave of immigrant settlement explored new work opportunities, faced labor challenges and developed neighborhoods, towns and cities, they brought their own unique cultural perspectives and traditions to the Wolverine State.

Q-TV’s new historical documentary will examine how our ancestral groups shaped Mid-Michigan and explore how their local communities survived and thrived amidst the challenges of starting a new life in a strange and unfamiliar land.

Many decades later, today’s immigrants still encounter similar challenges as they choose a path of naturalization to become American citizens. Michigan’s cultural landscape will surely continue to evolve as they contribute to their communities, celebrate and share their heritage, and settle in to this promising new land.